BOSTON – This year’s celebration of OXI Day October 28th, organized by the Federation of Hellenic-American Societies of New England on October 24 at the Maliotis Cultural Center, was dedicated to the archetypal Greek woman who fought for the freedom of Greece and is fighting for her family. The celebration began on Sunday morning with a church service and Trisagion for the rest of the souls of the heroic heroes and the fallen of the war of 1940 at Saints Constantine and Helen Greek Orthodox Church in Cambridge, MA.

The celebration began with a prayer by Fr. Odisseys Drossos and the performance of the National Anthems by Panagiota Haloulakou.

In his greeting, Federation President Vasilis Kafkas said: “October 28, 1940 is a moment in the history of Greece. With this celebration we remember and honor the Heroes and Heroines of both 1940 and the following years but also on the occasion of the 200 years since the beginning of the Greek Revolution we honor all the Heroes of the Greek Nation. We know of many examples of the Greeks who fought for freedom. Others were killed on the battlefield and others by hardship.”

He noted that “today’s celebration is dedicated to the Greek woman. To Greek women. To our mothers, our sisters, to the grandmothers who fought in the struggles of the Greek nation.”

The keynote speaker was Karamanlis Chair at Tufts University in Boston and former Minister of Education of Greece, Professor Constantine Arvanitopoulos who said: “In 1940, the people were living the tragedy of a great war. Democracies were in decline, fascism and Nazism, established in Germany and Italy, along with militaristic Japan, were the reformist forces that brought peace and stability to the international arena to impose their absolute domination.

Professor Constantine Arvanitopoulos, Karamanlis Chair at Tufts University in Boston, was the keynote speaker at the celebration of OXI Day.

“World War II was the bloodiest conflict in human history. The total number of people lost is estimated at 70 to 85 million in soldiers and civilians.

“Our country was not left unscathed by this conflict. Greece was dragged into the war after the Axis forces provoked it to finally pay the blood tax of 800 thousand people, i.e. 10% of its total population of 7 million at the time. It was an incalculable and disproportionately high blood tax paid by a small nation-state, but with a lofty sense of freedom, to stop the tyranny of authoritarianism. It was surpassed only by the Soviet Union and Poland, which lost 14% and 16% of their population at the time, respectively.

“The occupation of Albania by Italy in 1939 brought war to the Balkans. Italy had escalated its aggression against Greece from early on. On August 15, 1940, on the feast day of the Dormition of the Panagia, an Italian submarine sank ‘Elli’, the Greek destroyer that was in Tinos for the celebrations. The Metaxas government, despite the overwhelming evidence that Italy was behind the attack, took a soft stance to avoid war.”

Arvanitopoulos continued: “At dawn on October 28, however, the Italian ambassador to Athens, Grazzi, delivered an ultimatum to dictator Ioannis Metaxas, in which the Italian government demanded the surrender of Greece. Metaxas replied ‘Alors c’est la guerre.’ `Then we have a war.’ The mobilization of the Greek people was very fast. Instead of the 12 days that were planned, it took only eight to complete it. Because it was universal, the reaction, the uprising, and the participation of the Greek people was magnificent.

“George Theotokas, one of the leading thinkers of the generation of the ’30s, vividly described the climate that prevailed in the streets of Athens that day: `Crowds of young people have poured into the main streets with banners and flags, laurels and music. People participate in these events, applaud, cheer. I had many, many years to see such enthusiasm in Athens. One feels a passion in the air, a fanaticism, a valor. And a perfect, absolute national unity. It is the first time in my life that I feel such unity reigns in the place,’” Arvanitopoulos concluded.

In addition to the speeches was Greek folk dancing by various troops, poetry, and inspiring anecdotes.   The participants renewed their commitment to the values and principles which gave Greece strength in October 1940.

The program was followed by a light reception in the MCC Atrium. 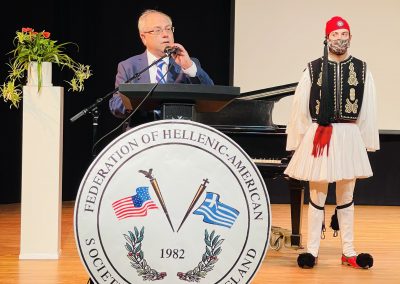 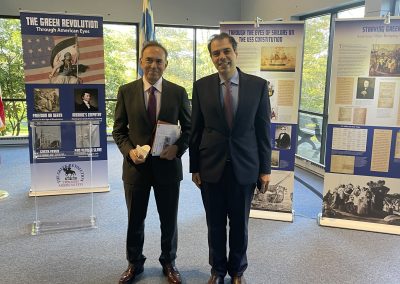 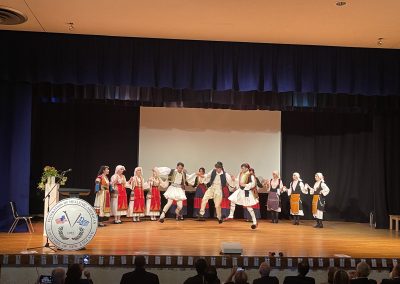 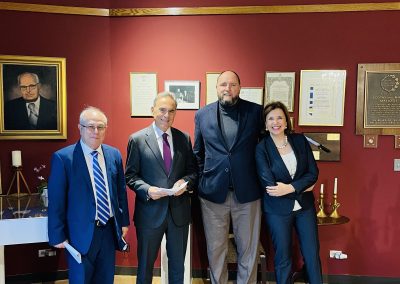 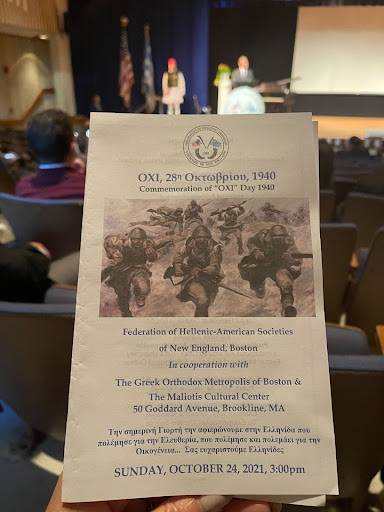